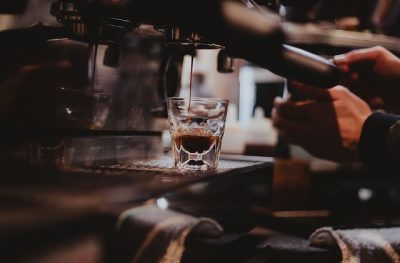 If you’ve ever taken the time to observe what goes on behind the counter of a coffee house, you may have noticed the barista who’d taken your order tinkering with a contraption clearly dispensing coffee, evident from the heavenly aroma hanging in the air, but unlike anything you’re likely to have at home for whipping together your morning brew.

This is the espresso machine, pretty much the heart of a high-traffic coffee house, integral for mixing up your favorite caffeinated beverage on the menu.

Anatomy of the espresso

It’s a drink on its own, certainly, and also the base for many popular beverages like cappuccinos and Americanos, but what sets it apart from your typical pour-over or French press coffee is the method with which it is made. Those machines you’ve spied at your local Starbucks essentially use an extraction method involving pumping pressurized water at high temperatures through finely ground coffee beans, letting you pour out a concentrated and full-bodied dose of dark roast to give you that jolt of rich, lingering flavor coffee addicts adore. 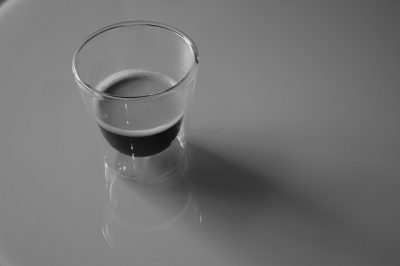 In fact, it’s partly because of the intensity of flavor that espresso is consumed in shots of an ounce and a half, compared to the typical 8 ounce cups of pour-over coffee you might indulge in at breakfast. Espressos are also – and in some coffee houses, exclusively – served as double shots, called “doppio”s (Italian for double), measuring about 2 and a half ounces of intense caffeinated goodness. The smaller quantities are the reason you’ll find espresso shots served in quaint little demitasse cups – which, if you’re interested in a little bit of coffee enthusiast trivia, is French for “half cup”, typically with capacities of 2 to 4 ounces.

Note, though, that just because a demitasse cup of espresso is referred to as a shot doesn’t mean you knock it back the way you would a shot of tequila – the smaller quantities of rich, layered flavor are meant to be sipped slowly to fully indulge in the depth of a good, strong shot.

Now, while additives like milk or cream are never added to espressos – though they can be incorporated with an espresso base to whip together other caffeinated beverages like lattes and mochas – a good espresso shot does come with a layer of froth topping the beverage, referred to as crema. And while you can’t be blamed for assuming this translates to “cream”, the frothy layer is actually a by-product of the extraction process, unique to espressos and a good indicator of how fresh the beans your coffee is extracted from are.

Thanks to pressurized hot water pumped through your finely ground coffee, carbon dioxide produced during the process of roasting coffee beans gets dissolved in the liquid. As the extracted coffee returns to normal pressure, these gas bubbles escape and combine with the soluble oils found in the coffee, creating the layer of foam topping your shot of espresso. The thicker the crema, the fresher the coffee beans your shot was made with, while the darker the crema, the stronger the flavor of the espresso.

You’ve likely seen coffee beans labelled ‘Espresso’ in the supermarket before, but there is, practically speaking, no particular blend or roast of beans specifically used for espresso. In fact, the same beans you use for your French press or drip coffee will serve you just as well, and whether you opt for coarser and more acidic flavors or light and fruity notes is up to your personal preference. What really makes the difference when it comes to espresso is how it’s ground – unlike pour-over or French press, where your coffee beans need to be a coarser ground so they can be caught by the filter without leaving sandy residue in your cup, the method of extraction for espressos necessitates very fine, tightly packed coffee grounds through which hot water can be pumped at a high pressure to swiftly and efficiently extract your shot. Because of this method, compared to the steeping and brewing methods of French press or drip coffees, espressos are faster to make – which is important, considering that a shot or so of it is the core ingredient in many of the items on a coffee house’s menu. Which leads us to –

We’ve already covered the theory of how espresso is made and how the extraction method makes it different from brewed coffee. But the machine used to make espresso is also an important part of the equation. From a commercially used unit at a high-demand café where the machine is virtually always in use to a smaller, home-use unit, the principle behind the most sophisticated espresso machines is more or less the same. 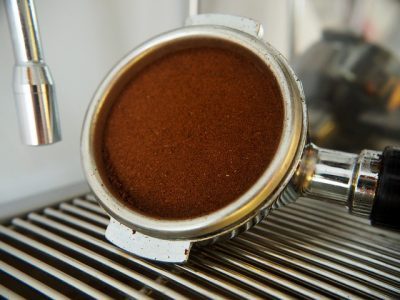 A porta-filter – a basket-like, removable element with a screen and two spouts located at the base to collect extracted coffee – is filled with ground coffee beans and twisted on to the espresso machine, with cups in place under the spout to collect the extracted liquid. Water is poured into the reservoir of the machine, and once the valve is switched to the ‘Espresso’ mode, a pump draws water from the reservoir into a heated chamber or boiler, to warm it up just shy of boiling point – typically between 150 to 200 degrees Fahrenheit.

The control panel lets you keep an eye on the temperature of the water, which, once it’s reached the right temperature, is forced at high pressure through the porta-filter. A single shot of espresso takes roughly 25 seconds to extract, in this manner. For commercial units at places needing to pour out high volumes of coffee around the clock, espresso machines are often hooked up to an external water source to eliminate the need of constantly refilling a reservoir manually.

Espresso machines also come with another mode and an element called the steam wand – turning the valve to the ‘Steam’ mode lets you steam up containers of milk and cream to be used with espresso bases for beverages like lattes and cappuccinos.

Manual machines also exist for experienced baristas who like the challenge of intuitively nailing the perfect espresso, or for those who’d like to forgo the bells and whistles of electrical units and wish to incorporate this method of coffee-making into their skillset. Rather than using a pump to push water through the porta-filter, these use a lever, which, when pushed down, forces water heated up in a sealed reservoir through the carefully tamped ground coffee in the porta-filter, the extracted liquid pouring out of the porta-filter’s spout for collection.