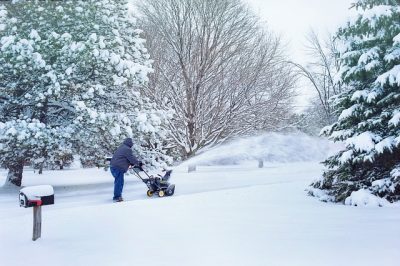 Winter is coming, and those aren’t just the Stark words. And neither are we (unapologetically) quoting Game of Thrones gratuitously. After all, it’s best to be prepared when we know that the snows are going to be piling up soon, and this means having the right tools to tackle the drifts that will, inevitably, clog up our driveways and yards once the temperatures start plummeting.

Now, while there are the options of installing heated driveways, or hiring a professional to come in with their plow and do the job for us, this is often not feasible or sustainable, especially if you’re not working with that big a space to warrant the expenses. Typically, a good old practical snow shovel would do the job just as well, or a gas or electricity powered snowblower. But which tool is the right one for you? Let’s look at a few things to consider before you choose your weapon to deal with the impending winds of winter. 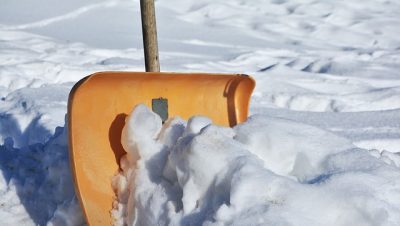 The fact that this classic piece of hardware is around to this day and gets broken out every winter by thousands of households is a testament to its long-standing effectiveness and functionality. In fact, while you may own a snow shovel without owning a snowblower, chances are, if you own a snowblower, you own a snow shovel too. The tool is simple and intuitive to use, without any elaborate prep-work or maintenance needed – just grab your shovel and clear out your driveway, and then stash the tool in your shed or garage until you need to break it out for the next round.

If anything, snow shovels give you more maneuverability than snowblowers do – a shovel is easier to use when working around obstacles like plant pots you don’t want to cover up with the snow you’re blowing away, and doesn’t require you to move anything on your driveway as you clear it out. Think about it this way – if you had to move your car every single time you needed to clear out the driveway because of the decided lack of mobility using a snowblower brings, you’d probably not be too enthused to get down to it, what with all that extra time you’ll be spending out in the cold.

Snow shovels are also the more pocket-friendly option, especially if you don’t experience too heavy snowfall where you live or have a smaller sized lot where the expense of a snowblower would likely be disproportionate to the returns you get out of using one. Available in various ergonomic and user-friendly styles, snow shovels are, all round, simple but effective tools that get the job done.

However, this doesn’t always mean a shovel is the right snow-clearing choice for you, even if you’re clearing out smaller patches of land. Shovelling does require more stamina than you’ll be using with, for example, an electric snowblower unit, so the activity is likely going to be too strenuous and ill-advised for anyone facing medical or health conditions like muscle or back pains, arthritis, and so on. Over-exerting oneself while shovelling snow can be potentially deadly, with the American College of Emergency Physicians estimating 100 deaths annually, mostly related to heart attacks. Anyone with a weak heart or recovering from cardiac arrest is strictly recommended against shovelling snow. 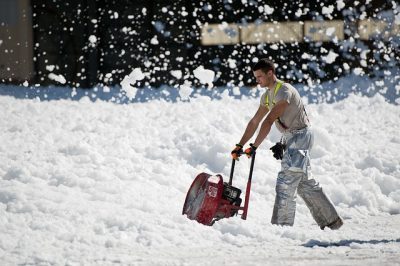 For those situations where health, age or the sheer size of the area you’re supposed to be clearing out, or the volume of the snow heaped outside your home, makes shovelling unfeasible, a snowblower can be a lifesaver. Though it is certainly more of an expense than a shovel, a unit combining the right functionalities can bring great payoff.

One of the first things to consider when mulling over your potential future snowblower is whether you’re going to want a gas-powered one, or an electric one. Each has its own sets of pros and cons, making them more ideal for certain usage scenarios over others.

If the reason you’re opting out of using a shovel is because you’re looking for an option that’ll be less taxing to you physically, an electric option is likely the better choice. More portable, compact and lightweight, you won’t have to worry about lugging a heavier and more unyielding gas-powered snowblower up and down the drive, or about changing the oil and maintaining the engine. Electric options are the better option for smaller lots of land, though – since they have to be plugged in, you’re limited by how far your cable and extension cords let you go. Moreover, electric options may not be the right choice for tackling too heavy volumes of snow, even with a two-stage model.

If you’re up for a little exercise, though, and the main reason you’re opting out of a shovel is because you’re clearing out a long driveway, a gas-powered option might be the right pick. Without any cables to worry about, you’re not limited to the space around your power outlet, and thanks to most models being self-propelled, they aren’t difficult to sweep up and down to clear out your driveway either. Gas-powered options are also more heavy-duty, available in various makes and models to accommodate different volumes of snow – if you live in an area where you experience heavy snowfall, and have longer stretches of land you’ll be clearing out, a two-stage gas-powered snowblower is likely going to be the best choice for you.

For both electric and gas models, whether you’re going for a one or two stage model makes a difference to the type of performance you get. Typically, one stage models have augurs cutting through snow to chuck it out of the discharge chute, but these models can be slow-going and at times wholly inefficient when dealing with larger areas or thicker layers of snow. Two-stage models, with a high speed impeller behind the augurs sucking up churned snow and throwing it out the chute, helps speed up the job, and is the more ideal choice for heavy-duty snow clearing of greater depths and over larger areas.